The personal Arms of Archbishop Peter Comensoli were assumed in 2011 on his ordination as titular Bishop of Tigisi in Numidia and borne by him as Auxiliary of the Archdiocese of Sydney (2011-2014). He bore them impaled with the Arms of the Diocese of Broken Bay as its third Bishop (2014-2018). The practice of bishops impaling their arms with the arms of their dioceses is not traditional in Melbourne where (with the sole exception of Archbishop Frank Little) Archbis 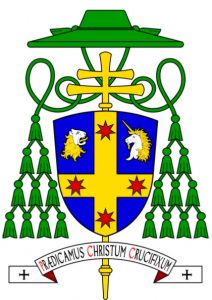 The arms and motto which then Bishop Comensoli adopted are of a personal character and are blazoned, in the language of heraldry, as follows: Azure, on a Latin cross inverted Or four seven-pointed mullets (or Commonwealth stars) Gules, in the first quarter a lion’s head erased Argent crined and langued Or and in the second a unicorn’s head erased Argent crined and armed Or respectant.

The motto ‘Praedicamus Christum Crucifixum’ is a quotation from the Apostle Paul’s first epistle to the Corinthians (1Cor1.23), and can be translated as ‘We proclaim a crucified Christ.’

The inverted Latin Cross symbolises the Bishop’s nominal patron, the Apostle Peter and the stars reflect the Southern Cross, which shines out over the Great South Land of the Holy Spirit. The lion and the unicorn respectively symbolise the mind and the heart of love.